Silver Hair is a curse I may have mentioned that I have a weakness for characters with white/silver hair (especially if they're dark skinned). Unfortunately, lately this has led me to some pretty awful anime series.

The most recent one I finished was "Blade & Soul" which should be retitled "Blade and Soulless". The "Heroine" of the series was a sort of ninja assassin from the "Sword Clan" whose entire clan, (most especially her master) were wiped out by this new Evil Empire. She, thanks to her training, is stoic, virtually emotionless, and barely speaks. At first it looked like it might be some kind of Wandering Hero(ine) story, but no, the writers had a VERY small cast they wanted to work with, (virtually all of them female and very busty, so if that's all you care about, go to town) and an equally small list of locations to have the action. Alka is supposedly motivated by revenge for her murdered master, a murder she was accused of by the empire mage/warriors who actually did the deed, for which she has a bounty on her. Only problem is, she doesn't come across as motivated by much of anything.

Protip, while it might sound cool to build your story about a strong, silent, badass blade chick, the actual result is about as interesting as a brick.

Another central character is this blonde woman who runs the most famous huge saloon (and implied brothel, although none of that is in evidence). Eventually it comes out that Alka, as one of her assignments, killed her lover, the one who built the place for her. She wants revenge, but she's way too sophisticated to just have her killed. She wants Alka to suffer, but as an emotionless wretch, that's impossible. Two thirds of the way through, Alka gets her revenge, killing "Jin Varrel" the top of the warrior/mages of the Empire, who uses some kind of magic called the Corruption that mostly makes people shred and vanish, but it doesn't work well on Alka, because her butterfly tattoo is kinda magical too, although she apparently doesn't know much about it.

Alka being out of work and out of reasons to do much of anything wanders about, running into people who miss loved ones she's killed or people who want to kill her, but she remains pretty much empty. Starving, the Proprietess of the bar/brothel gives her a job, and assigns her to work with a girl who had a murderous past, but is really nice and helpful, actually. Alka shows the barest glimmer of starting to care, so the girl is killed. Revenge at last! But it's strangely unsatisfying.

Jin Varrel is resurrected by the second in command, who actually turns out to be the real leader of the baddies (after the emperor) because Jin is really just an empty emotionless puppet because that's the only thing that can contain the Corruption. But this time, she somehow hangs on to her original identity, and somehow Alka is connected. I say Somehow advisedly, because it doesn't make much sense. You could wear out a strip of carpet going back and forth to the fridge with this series. They meet up, fight, and somehow Alka having emotions (which hurts her fighting ability) frees Jin up too, because they are "Alike" (The dead barmaid also made a point about how they were alike, which is the key to Alka's emotions, it seems), and so instead of finishing fighting to the death, they hug or something.

There's also a sort of Desert Pirate Queen, and a brash, noisy drunken bounty hunter girl, but they don't really drive the plot very much, although they both contribute vast tracts of land to the scenery.

Like Amagi Brilliant Park, there's a final episode that comes out of nowhere, throws the characters into a stupid treasure hunt storyline, and really adds nothing. And don't even bother with the little chibi vignettes that came out with the BD release.

It was crap. (I had to balance out the last two brilliant series I wrote about.)

In further erronious pursuit of the Silver-hair... I was watching Absolute Duo. And as charming as the girl is, I am totally sick of the guy who acts like a girl throwing herself at him is radioactive trope. And when they strung together a SERIES of "Awkward falls into compromising positions" in the second episode, I just stopped the tape and walked away. 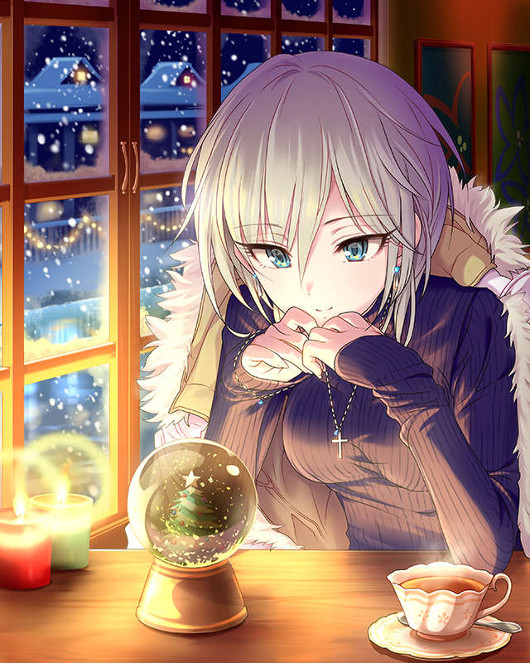 Pete, who's that girl and what's she from?

Mr. Duck, I dunno, my repulsion for School-centered Anime might overwhelm my attraction to platinum blondes.

I think my archetype had to have come from Pirotess from Lodoss War, even though she was the baddie, she was the hottest dark elf I'd ever seen.

Unfortunately, that passion also led me to watch ANOTHER awful anime, Tenchi Muyo: The War on Geminar, which also had a lovely white-haired dark elf, but the stupid was just so overpowering, it made me wonder if any love I'd had for the entire Tenchi oeuvre was misplaced.

5 Sorry, I was joking. She is a secondary character in iM@S CG. Here's the anime design: 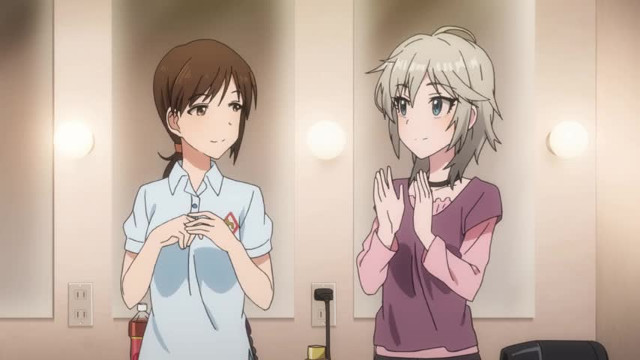 6 Coincidentially, my high school crush had a hair like that. In Russia it was called "ash blonde" and oddly enough it's natural, but very, very rare. It's very beautiful. It's also different from the normal grey hair that people get with age. It's more yellowish in tone and becomes more blonde-like with years (yes we're still in touch, so I know :-).

BTW, since we're on topic: Katanagatari. Unlike Anya, Togame is the main character. I'm not sure it meets the criteria, but I think I'm not going to spoil too much if I mention that Togame's 100% grey hair is a result of a shock.

7 I watch War on Geminar at least once a year. Episode eight is a great one for a show like that.

Part of the reason I like it is the main character does not go through the development, but becomes the marker around which the other characters change. He is the inspiration.

It is similar to Ah! My Goddess in that regard.

Yeah, that's about all they have in common, I know.

8 my repulsion for School-centered Anime might overwhelm my attraction to platinum blondes.

*shrug*  Your loss.  It's one of the best intentionally funny shows I've seen in years.

9 " It's one of the best intentionally funny shows I've seen in years. "

And at seven or so minutes an episode, the humor can repeat and not get too stale.

10 Frankly I did not like Seki, at all. Although perhaps I was poisoned by the manga. I read something like 2 chapters a while back, but I think anime did not improve upon it.

Wonderduck, humor shorts are really a mixed bag. I thought "I don't understand what my husband is saying" was really charming, but the fact that uTorrent takes ten times longer to seed out a 20 meg episode compared to a full length anime show continues to surprise me.

I'm still waiting to see if there's a good batch of the Tenchi short show. I had a batch of the first five, and since it was split into two storylines, it wasn't enough to give me any kind of impression at all,  And the idea of grinding through SIXTY individual torrents to collect it just hurts my brain.

13 It's a fickle thing, comedy and humor. I enjoyed Nozaki-kun more than Nichijou, for example. But obviously Nichijou was a far more ambitious anime. It aimed towards larger comedy with big payoff. Sadly, it missed a lot.

14 I assume you mean Inou Battle wa Nichijou-kei no Naka de. I didn't finish that because Commie didn't.

Now I'm wondering if I should bother to pick up the rest, and from whom.

15 I thought that the Daily Lives of High School Boys worked better than Nichijou.

I liked Nozaki-kun as well, but I put it in a different category than 'slice of life'.

16 Unqualified "Nichijou" refers to what was translated as "My Ordinary Life" in English.