You want Fry's with that?
With the cooling issue all taken care of (almost), I had one other computer issue to deal with with Himawari. When reading Facebook, I have a tendency to control-click lots of notifications to open them all in new tabs. But frequently that would lead to a random blue screen of death. Now, I had found a nifty utility that would comb through the mini-dumps and tell you want they were (BlueScreenView), but they were all over the place. The fact that they always occurred during heavy Facebook use, and it happened across two different browsers was confusing. Plus it didn't happen when I was using Etna. So it dawned on me that there might be something off with my hardware, not my software.
Enter Memtest.org. I ran MemTest86 overnight, and I got errors. So I ran them another night with just one DIMM in, and got errors. The next day while I was at work, I tested the other one. That one was clean. Running with just the one DIMM was okay, but a bit cramped. So this weekend's shopping included a run down to Fry's to get another 8 Gig stick. It was only $32.

While I was there I also grabbed a Silenx 120 mm fan. With all of the cooling moved outside the case, there wasn't anything but the very slow oversized fan that gently wafts over the drive bay moving any air inside the case. I had left the case open for a long time so I could watch the LED on the old Antec cooler, but that wasn't necessary any more. So when I buttoned up the case again, the video card started getting warm. (59 degrees C vs. 50 when open). I got this data from a monitoring program for my Corsair power supply I was finally able to run now that the internal USB header the Antec cooler hogged up was free for the usb cable that came with the power supply. (Those headers are two ports. I was going to make a splitter cable at some point, but that's no longer needed.) So while I was at Fry's, I grabbed the fan. It was hard to find something that didn't have multicolor LEDs in it for the casemod crowd. This one did have a little thermocouple hanging off of it to further moderate its speed and make it run even quieter. The fan definitely lives up to its name. It says it's <15 db, and I believe it. If they made a 4-pin model I'd consider changing out the fans on the radiator. And now, with the case closed up, the video card is running down at 48 Celsius.
I also grabbed another cheap 32 gig USB thumb drive. A long time ago I was able to get a USB card for my old Mac. It seemed like it would be a cheap way to back up the drive I've got left. Kind of a closing the barn after the horses burn it down.... It's been a bit trying since the thumb drive is DOS formatted, but the Mac has a way of putting its dual fork files on it that seems to be working. Biggest problem so far is file names with /'s in them, since they're legal on the Mac and not on DOS. Transfers are slow as heck, and figuring out where the occasional mismatches are coming from is not fun. But if I can get that squared away, and the freezer trick works on the dead drive, maybe I can save things.

Now I'm just struggling with Macrium to make a clone of my boot drive that is actually bootable. That backup is long ovedue. I had a malware scare with a fan control program I downloaded, which fortunately amounted to nothing, but then again, if the system is going to be stable again with the new ram, maybe manually setting the fan config after a boot won't be that big of a deal. I wanted to have a bootable scratch drive to test the fan program with. But an updated backup would be nice to have.

Oh, as for the title. Fry's itself, once a pinnacle of Electronics and Computer stores, had just been getting more and more depressing every time I visit, with more empty shelves and less selection than ever. And the things they do have in stock are just... odd.... Lots of things you never knew you never needed. And all the cute Asian girls are long gone. Even the surly Indian women are gone. The remaining staff, well, at least they seemed knowledgeable, but they were the final Rejects of Retailing - from "Middle-aged bodymod girl", to Mr. "We carry them but we don't have any", to "Guess my pronouns." The whole experience felt like they've been holding out on having their going out of business sale because the rest of the economy is so good, but they haven't been getting a piece of it.

1 Last time I went to a Fry's was sad and ultimately quite pointless. When I pulled up, I was surprised they hadn't rented out most of the empty parking lot to nearby businesses for employee parking. Then I went inside, and was stunned they hadn't sub-divided the nearly-empty store and rented out 90% of it as cube farms for startups. Or just sold the whole location to Google or Apple (who already has a building across the street). They can't be making enough money to even pay their lighting bill any more.

Ani-nouto is down Any news?

1 I have all the content, in 2 formats no less: the WP database and the original text files. Just need to find the time to feed it to Pelican. Not sure when.

2 So you took it down on purpose to change software?

3 No, the AB as a whole is shut down by people who were running it. Its founder had health problems a few years ago, and Singaporeans succeeded at making a go at it. However, it was hemorraging money.

Losing my cool
Seems to be my month for computer problems. First an ancient hard drive on the equally ancient Mac, and now my hybrid cooling system on my PC is down. I kinda knew something was coming, it was running slightly hot, but it went down fast. And of course, I never bothered to get the parts I wanted to redo the things left from the original canned system. Fortunately I have Etna, and ordered them from Amazon, but it's gonna be a few days without access to Himawari.

I was playing WoWS when I overheated and shut down. I tried changing out the water, but I realized it wasn't pumping, even though the pump worked. I drained the system and took parts apart, and I couldn't blow through it. I even tried my vacuum pump, and it actually held a vacuum for a few seconds, so it definitely wasn't flowing water. I mean, it could move SOME water, but my pump wasn't up to it. So I've got a new radiator and CPU block on order, and they use full sized tubing, as opposed to the skinny Antec original, so it should cool a lot better, but I'll have to do something else for the automatic fan speed control (I think the motherboard can do it) and I won't have color-coded LEDs telling me the water temperature.

7/13/19 Update! Done! I did have a few minor obstacles. The radiator was tapped to 4-40 (I think) before being painted, so I had to buy a new tap in order to clean out the holes and make damned sure they were 4-40. I also had to buy various lengths of 4-40 screws to hold the fans on it.

The biggest issue was soldering up a Y- cable to drive both fans. I started with the Y-cable that came from the Antec CPU block, but that was soldered to the control board. However I dug through a junk box and found the original air/fan heat sink that came with the processor and snipped off the connector and soldered the wires together. (I'd've preferred to crimp the connectors, but I didn't have any of the right kind of terminals.)

I also knocked out that wooden box thing to put the reservoir at the highest point, and the pump under it. Swung by Grainger for a fat tube of heat transfer grease ($4.50, more than I will ever need, and cheaper per gram than the tiny syringes you can get at Fry's).

While I was at it, I tore apart the Antec system to see if I could figure where the blockage was. Simply enough, it was the CPU block. It was made with paper-thin fins of copper spaced about a paper's thickness apart, and the enclosure forced the flow only though those fins. That was the source of all the resistance (so I saved the radiator to rest in a junk box for who knows what project in the future).

Once I decided how it was all going to go together, I ran all new tubing, filled it with water (less than I thought it would take), and fired it up. There was only a small drip at the CPU block that went away with a little tightening, and when I powered it up, WHOA! That poor pump that had been laboring against that restriction cut loose like nobody's business. The flow is amazing.
The fans also ran at top speed since the CPU Fan connector was set to 100% when the speed was moderated by the Antec CPU Block. Fortunately, the BIOS has a setting to moderate the fan based on a target CPU temp. Unfortunately, the BIOS setting won't go below 50%, which is still too loud and too fast. Fortunately, one of the utilities, MSI Control Center, will let you set cooling rules as low as 20%. Unfortunately you have to run it and reload the profile every time you reboot. Ah well, it's still way quiet, and a lot cooler. Running at 41 °C as I type this. 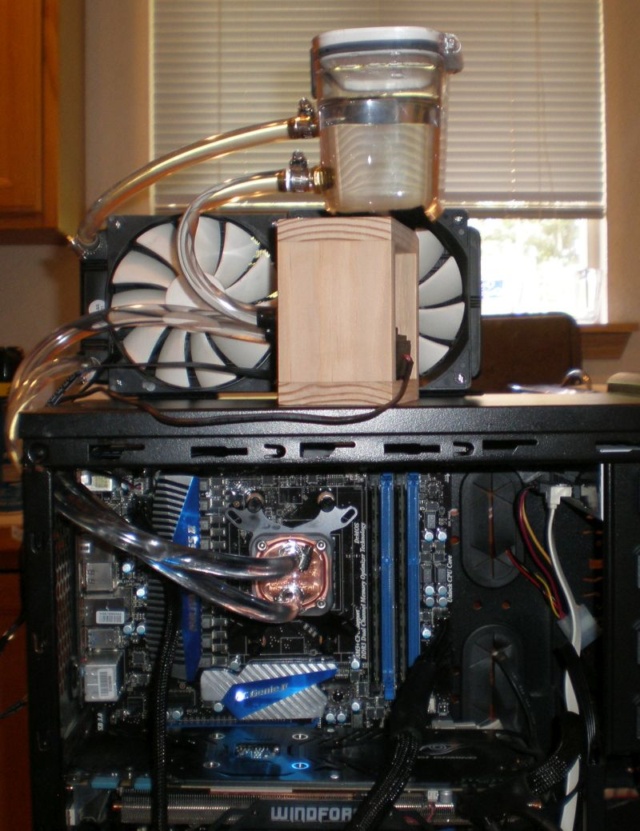 1 Good thing I don't need or want the performance gains that come with liquid cooling.

2 My primary goal with it was noise reduction, which can be significant. I wanted that because I watch a lot of video on that machine.  Also lower heat can lead to longevity. And maybe once I'm free of the last vestiges of the Antec cooler, things will stabilize.

I will have fun completely disassembling those components to figure out where the blockage was.

3 Scheduled for Friday delivery! Good, I don't want to miss two weekends of Warships in a row!

4 Man, I was so happy to leave liquid cooled computers in the 1980s.

5 At this point, it idles at 39C with the fans ticking over at about 1000 rpm. So quiet. And if I load it up the temp goes up and back down in seconds.  Even running World of Warships it averages only 44C. That pump is a champ, especially now that it's free of the restrictions from that old system.