Is everyone else having this problem? So I'm getting the Commie feed for Twintail, and I notice in certain spots of the OP, and sometimes (but thankfully not often) in the episode, there is a spot where the luminance of the image seems to have been dropped, resulting in the colors really getting grayed out. 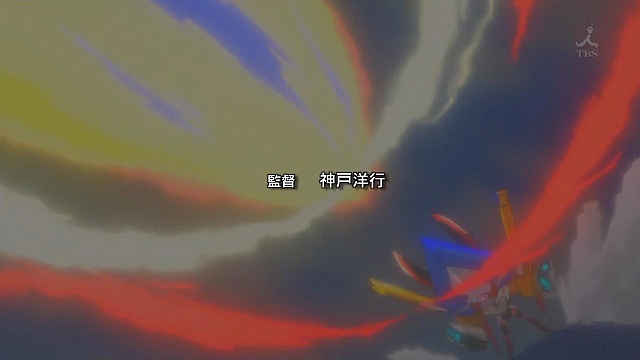 Looks strange, doesn't it?  But on the other hand, the text in the middle does go to full white, so I'm not sure what is going on here, but it looks like crap.  It persists for that entire sequence in the OP, from about 2:00 to 2:05.

The Imagined Village - Space Girl This has been earworming me all week, so I figured I'd share.

Update: The Lyrics: (Further updated to match the performance.)

1 Every lesson in life comes back to listening to your mother.

I still haven't got that one down, and I think I'm still glad for it.

2 Arthur: It's at times like this that I really wish I'd listened to my mother.
Ford: Why? What'd she say?
Arthur: I don't know! I didn't listen!

A Food Thing I missed posting this weekend, although I did finish the original Fate Stay Night. I'm not sure if I'm going to talk about it much. I disliked the whole Bait & Switch about the "Holy Grail" turning out to be some vile, evil and hateful vessel of concentrated liquid evil.

On the other hand, Sakura did probably get to take home that nifty kinky outfit they dressed her in for her sacrifice. But nobody mentioned anything about peeling her out of it before putting her to bed.... I know you're not supposed to notice these things, but I do.

Right, so the food thing. Some time ago a friend linked to a random (to me) Wordpress blog with a recipe that I finally had an opportunity to try out three years later (yeah, it's been sitting in my bookmarks that long). All you need is some leftover rice (as long as it's not dried out and crunchy), about a cup and a half, and a couple of eggs.

Scramble the eggs, add your preferred seasonings, stir in the rice, and plop it in an oiled frying pan. Presto, rice egg fritters. 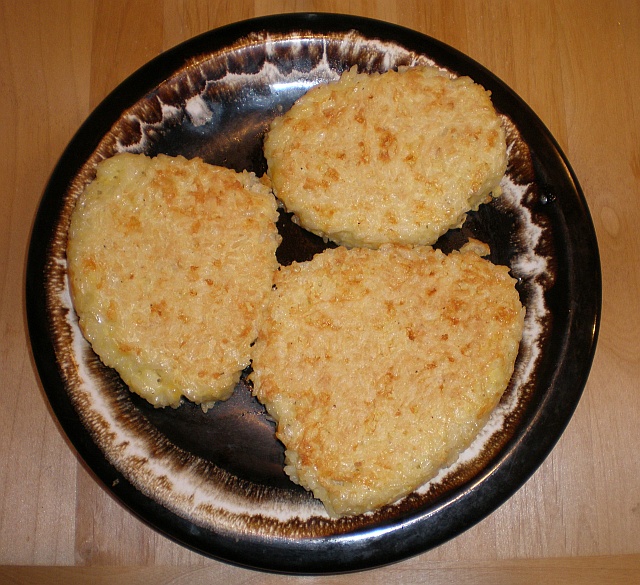 Now in my case, I first made them according to her loose recipe. Nice, but a little bland. The second time around I added a lot more salt and pepper than I would to eggs, considering that the rice will bring up the volume by about 4 times. A little garlic powder, and then, the key change, some shredded cheese.

I have one of those infrared thermometers, which I find indispensable in the kitchen. I mean, what the heck temperature is "4"? So I can tell when my cast iron frying pan is at say, 350°, which is a perfect egg cooking heat. I doled out the mixture into three roughly equal masses, and pressed them with a spatula to be maybe 5/8" thick. It took about 5 minutes per side, giving it a nice, slightly crispy exterior.

I suppose you could add just about anything to these, maybe some veggies, or finely diced ham. Bacon, naturally. I've even read comments on the blog entry about someone using brown rice and peanut butter.

In any case, I will definitely be making more of these in the future.

(The fact that I have a little rice cooker makes this much more convenient. But if you order out Chinese, and they give you white rice that you don't eat, it would make a perfect breakfast treat.)

Shingeki no Bahamut_ Genesis [eraser] Ep. 06 At the midpoint of the series, our heroes have been captured by Joan de'Arc and her knights, and taken back to the king. But rather than being executed, Angels intervene and order the king to protect the party.

At last, people start talking to each other, although Favaro and Kaisar still haven't managed to put all the puzzle pieces together about what really happened between their respective parents, but it's enough that they have serious doubts about their rivalry. Well, at least Kaiser does. Favaro can't give a shit about much of anything, although that attitude probably won't protect him much longer.

In the meantime, Big events are starting to bear down on them, and a mysterious man who presents himself as Amira's father (Amira being the demoness - who is revealed to be half angel in this episode) appears and leads her off, but disappears before he can tell her anything useful when the demons start their attack on the castle.

We learn more about Bahamut, the dragon more powerful than heaven or hell, who can be revived by the combination of the god and demon keys, and is showing signs of arising again any time now, and the sacred knight whom legend says will bring peace when Bahamut returns. Joan believes that may be her.

There are little details captured in this episode as well. The gems in the bounty-hunters cuffs are Demon detectors, but they don't go off around Amira when she's in human guise.

Amira merged with the god key when she stole it. And the Demon key is hidden in Helheim, where she has been trying to go all this time. If she were to succeed, it could be the end of all three realms.

Random images From Episode 5 of Twintail 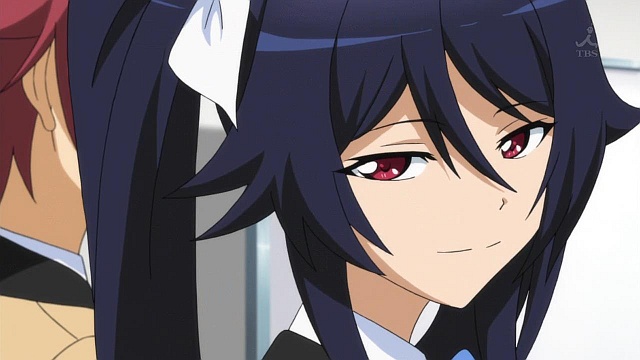 No particular reason, I just liked the expression.

From Episodes 4 and 5 of Bahamut 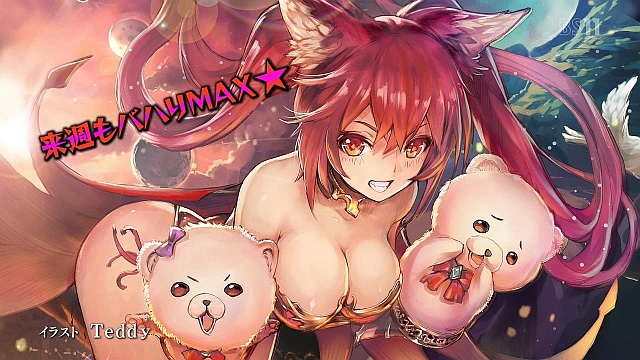 Nutso Wolf Demoness who either has serious mental issues, or possibly sentient handpuppets. Hasn't contributed much to the show other than decorating the scenery. 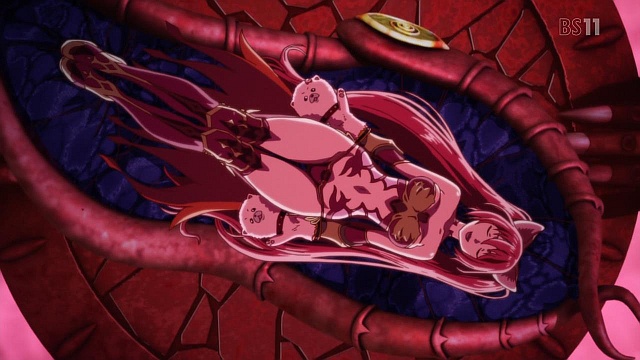 But hey, she decorates very well.

1 Alternate caption for picture two:
"Check out these puppies."

Sad when I comment on my own posts, innit?

Fan art is dangerous I'd seen her around a few times, but it was one of the random headers over on Brickmuppet's blog that made me ask who she was.

Some time ago I found a batch torrent of Fate Stay Night and downloaded it, but didn't really get into it. Then the new series started up, and I started getting that too. It was kind of interesting trying to watch both in parallel and seeing events play out from two different points of view, like (Insert the title that Japanese movie whose name I forget of the same story played out from four different viewpoints). While poking around I saw another Fate batch, saw it had 25 episodes instead of the 24 I had, so I started pulling THAT in, and discovered it was yet another series.

That's a lot of stuff I've committed to watch over a purple-haired minor character, who isn't even in that third (actually second) series.

(BTW, another batch I'm stuck with is a full form of Mari & Gali that includes a long special, if anyone wants to help me make my ratio on that, it's from Wasurenai. (Fortunately I was able to drop the Wasurenai subs that I already had into the folder, force a recheck, and not have to pull down the whole thing.))

2 Thanks, I was thinking Kagemusha, but when I looked it up, I knew it was wrong.

3 Don't forget Carnival Phantasm (although I don't remember if Rider is in it).

4 I did not know about that, I'll have to look for it, or at least research.

Unfortunately the protagonist in the first series is the type I really hate, the moralistic pacifistic pollyanna who thinks they can win a war without fighting. I can already see there is going to be rules lawyering.

5 The anime encyclopedia gives a voice credit for Rider, so I guess she is.

And there are a few torrents available.

Halloween After the first kid, it started raining, so knowing that would lower the turnout, I started giving two candy bars to each kid. I count what I have before and after the evening's activities, and so I know I had 73 kids visit this year. The average is normally around 100.

I did have a lot leftover, but since I normally pack some of those "fun size" bars for snacks during my union-mandated breaks. they will not go to waste. Hey, they're under 100 calories each and they keep me out of the vending machines.

I always make a point of giving out real candy bars, Snickers, Milky Way, and 3 Musketeers, because I remember the heartbreak of getting home and having an awful lot of those tiny Dum-Dum pops, or Smarties. Or even worse, 6 cents in change. I even take the day off from work.