Kizumonogatari So, I finished the three movies in Kizumonogatari yesterday. It was great to finally understand the situation with Araragi, the vampiress with the ridiculous name, Oshino Meme (the negotiator), and the busty class rep, Hanekawa.

But it's going to be quite a jolt when I finally get back to the first installment of the series, because the direction is so different. One of the things Bakemonogatari was known for were the many brief flashes of interstitial text related to the story appearing on screen between cuts. This has been cut down extremely, mostly just red or black cards with words for red or black in different languages on them. Maybe not as interesting, but it helps it flow a bit better because you don't need to mash the pause button so much (On the earlier series, I recommend just watching it through once before even trying to read all the text).

The other stylistic difference that will clash is the use of simplified, near-chibi, and other odd character design shifts to go with the mood. There is also, in the third movie, a really over-extended fan-servicey scene with Araragi persuading Hanegawa to let him fondle her boobs before going to fight the vampiress, although I'm sure I've just persuaded some folks to seek this out with that....

The story is a a lot less talky and more action oriented than the previous (or technically following) chapters. That's not to say it's a wall-to-wall actioner. But having been turned into a Vampire by an especially powerful (although weakened) Vampiress has given him extreme regeneration powers. He can lose an arm (And does, many times) and have a new one appear in seconds. This is played out to absurd extremes in the final battle.

Despite all the differences, it is still very clearly in the same mold as the other Monogatari stories, with artistic settings and no unnecessary characters being shown.

It exists in this weird state of being the first story with all the background needed for the first released series, but perhaps not necessarily the best entry point either for the series.

(The other artistic difference in this set of episodes is they use that annoying red skin highlight with the white dot in the middle technique, which looks so much to me like it should be a first and second degree burn. I may be wrong, but I don't recall that being in the earlier releases.)

___-Monogatari I've been fascinated by the Bakemonogatari series, but I've never watched them all all the way through. It kept bugging me that I had missed the origin story.

Apparently I was wrong, but not by much. The original encounter between Koyama Araragi and the vampire was chronicled in Kizumonogatari, which actually didn't come out until 2016/17 (It's in three parts). A chance search today turned it up. Now maybe the completest in me can finally sit down and watch the whole thing IN ORDER! (At which point I'll probably find out there was another series I missed.....)

But at least there's a chance I'll finish them, unlike the Final Fantasy games 1 through 11 I accumulated for my Playstation, which hasn't been hooked up since my old Tube TV died.

ETA: Added a new tag in uTorrent just to group them all together, and according to this list I missed a LOT. Fortunately it all seems to be available, but what I DO have is a mess. A lot of circles stopped part way through, so I have some duplicates, and some single episodes, and at least one season says it has 13 episodes, but all the batches are 1-12. It's a mess everywhere, not just my directories.

Steins;Gate With a new series (Alternate ending) coming out, I realized I never finished watching the original. I started over. I was surprised when I realized my files were dated 2011! (Sheesh, was I on dial-up then? Or Clearwire?)

Annoyingly, the audio track on the first episode sounds like crap, like it's overcompressed or full of noise or something. A quiet scene sounds like it's got a rocket flying through it. Dunno if it's the file, or maybe the codec in the 64bit version of MPC-HC doesn't like the old encoding so much any more. I don't think it's corrupted, but I've never run into anything like this before. It's really annoying.

Further testing. Still bad when opened in Ifranview, but that could be using the same codecs. Still bad when opened on Etna, which has the 32 bit CCCP loaded (for some reason the 64 bit version started crashing on start, so I uninstalled.). So it must be the file. I guess everyone was compressing things to death back then. The episode is just over 281 meg,

Mining a Meme from Killing Bites 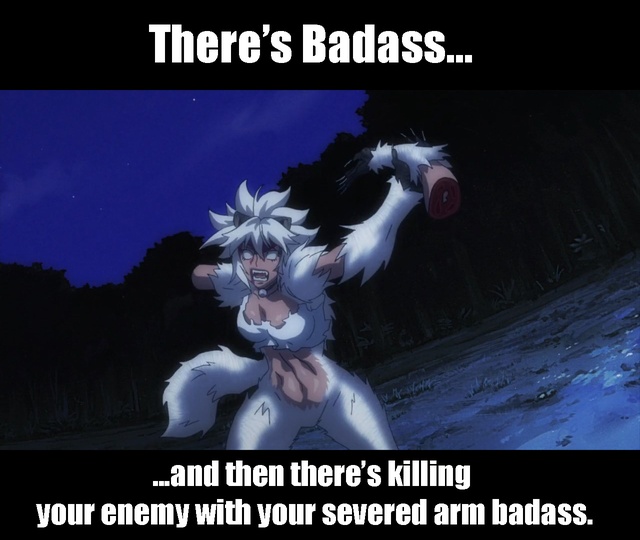