Shingeki no Bahamut Genesis You may recall I highly recommended this Epic series. Mawaru has just put up the 4th and final BD on NyaaTorrents.

Himawari gets an Upgrade World of Tanks and other things have been taxing Himawari's poor GTX 650 video card. It doesn't take TOO much to max out the GPU and the fan whirrs like mad without much provocation. So, I went for the top of the line, but missed a little again. I set out for a GTX 980 Ti, but what I found was the non-Ti model for about $120 less (Still a $500+ card), but it was the best thing on the shelves at Fry's and still 5 times more powerful than the old card. One nifty thing about the Corsair modular power supply is that in the bag of power cables, there was one specifically for supplying juice to Extra Power-hungry PCIE cards. No need to tap into the hard drive lines.

I also found a liquid cooling unit for the CPU. Fortunately I didn't let the Salesgal talk me into the bigger unit, as the one I got barely fit in my full size case. Installing it was scary, mostly because I couldn't get the damned OEM heat sink off. I did think it odd that instead of the typical thermal grease, the original heat sink came with a patch of gray something pre-masked on it. I thought it was nice and would keep things neat. I didn't realize the putty would stick like glue. By the time I prized free the heatsink, the processor was yanked out of the ZIF socket along with it! I even bent a couple of pins slightly. Fortunately they were not bent so far that they could not be bent back without breaking. But getting the processor free of the heat sink required the services of a kitchen knife, and even then it was iffy that I could get it off, and getting cut was a possibility, given how unwieldy the heat sink was. When the CPU suddenly popped off, it was surprising.

The cooling unit came with all kinds of hardware for attaching the cooling plate instead of the using the original heat-sink mounting hardware. Virtually none of it fit (the ZIF socket must be higher profile than they planned for), so I figured out how to use the original screws to hold it in place. The radiator/fan/pump unit replaced the rear fan in the case, and took up a lot of room, almost 3". It also came with a second fan, in case I needed even MORE cooling.

Once I managed to get it all together, it was amazing. The new graphics card has three fans, but because of that, they all run much slower, and so the noise level has gone down considerably during games, and the water cooling has totally stabilized the CPU temperature, and again, killed almost all the noise. The only downside is the noise it does produce is a steady, low sine-wave note, which even though it's quiet, still penetrates from all directions.

My frame rates didn't quite get the boost I thought they would, but the graphics modes are higher, so that evens out. My network is more of a limiting factor now. The reduction of noise (except for that note) is really, really significant, and I wonder if I added that second fan would it drop even more.

I'm even tempted to push the Overclocking button on my motherboard. The Graphics card has some overclocking options as well, but I'm not sure how to use them properly.

One sad thing is that my case, which is lined with foam to help deaden sound, is opaque. And the liquid cooling unit has an RGB LED set in it that will actually indicate temperature. The video card also has some gaudy LED bits on it, but none of that can be seen when the case is buttoned up.

Knights of Sidonia - Suits A space suit with a skirt and super high heels? 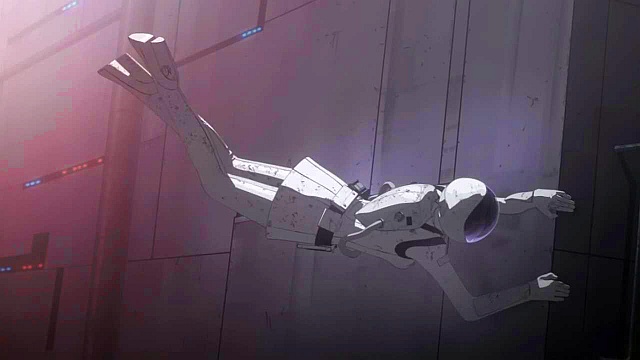 Why not?  If you've got the technology, flaunt it.

They also have... other... technology. It's good to see the tradition has survived a thousand years after the distruction of Earth.  Below the fold...
more...

1 In addition, nobody bends backwards in space.

2 Actually, there was one "Panty" shot. For shame, the woman is the ungendered chick's grandmother! (Lucky elites apparently get longevity treatments that nobody else seems to notice.)

This season has been a bit odd. The concentration has shifted from the Gauna as the enemy to an internal enemy (The "reincarnation" of the mad scientist who did all kinds of forbidden research) and even moreso, it's become the oddest sort of Harem show too.

Seriously. One of the haremettes is a giant robot-sized creature made from the same stuff as the Gauna, with the personality of a young girl, who exudes a more human-sized avatar at the end of an enormously long tentacle that visits our hero's house through the ship's plumbing, that resembles nothing so much as an inflatable beluga whale (That's a bit of her in the second shot).

Then there's our girl above, and the Ship's XO who mostly functions as the resident cock-blocker, and about 50% of the other women in the cast who have a bit of interest in him.

But at least he has the excuse for being clueless about girls, being raised in a combat simulator by his clone grandfather below decks.

3 That sounds pretty fun. Almost like IS, which I thought was great right until the ending when they nerfed the best haremnette.

What's up with the prostetics at such a tender age? You'd think the advanced enough tech would be able to re-grow limbs as needed.

4 VERY perceptive! In fact, after the combat injury that busted up her arm and leg, she had the option of getting them regrown, but she chose the cybernetics because she wanted to get back into the action, and having them regrown would have taken too long.

As a bonus, she can split the fingers into ten digits, and send out a data cable, and even directly interface into her "Frame's" systems, although the interface is far from perfect.

5 I reached about the same place and found that Yuhata wasn't actually blocking much of any cocks, poor thing.

6 Well, she WANTED to, but Tanikaze doesn't seem to know what one is for yet.

As an Amazon associate, even if you don't buy anything from me, if you click on one of my links before you go to buy something completely different on Amazon, I get a tiny referral fee.
I have a story in this: